Posted on January 25, 2013 in Andy's Videos Karma Cause Wiser Eyes

While shuffling through old videos, I found one I’d almost forgotten about. It’s Andy’s King Christ video in which he talks about his new religious movement and it’s associated charities.

This video is especially educational because Andy touches on so many of his numerous scams.  He briefly touches on his e-cigarette and then brags that 50% of the proceeds are going to his fake Karma Cause charity.  He also brags that used e-cigarettes sold through his now defunct Wiser E-Cig company would be refurbished and donated to homeless shelters (because they’re all just dying to get their hands on more e-cigarettes).

Next Andy talks about his fake Wiser Eyes HD sunglasses, which are actually MyVu Solo EV video glasses and are of course not actually HD at all.  I think it’s hilarious how Andy thinks a weak photo-paint job on the MyVu solo product image can fool people, but whatever.  He goes on to mention that the sunglasses are 1080p, which of course the MyVu’s are not.  The irony is that Andy can’t even afford to buy a pair of MyVu’s to show off in this video – he has to rely on images swiped from eBay.

Andy goes on a rant about how he’s going to personally rebuild Solomon’s temple (and Herrod’s temple because he apparently doesn’t know the difference) and allow people to walk through the temple in HD with the Wiser Eyes Sunglasses so the temples will “never be torn down again.”  The funny thing about this of course is that the movement is called “King Christ” and one of the main teachings of Christ is that we don’t need to go to a physical temple to worship God because God lives in all of us – even pathological lying sociopaths with felony records like Andy.

Finally Andy rounds out his rant by bragging about the Chimera phone, which of course never materialized, and how it along with Andy’s other fake companies, bogus charities and imaginary technologies is going to change the world.  At the top of the video you can see that all these world changing, beginning with the launch of the Wiser Eyes Temple, were supposed to have happened last December 21st.  The Karma Cause website also mentions the magical December 21st date and claims to kick off the world change campaign with a million dollar donation to humanity (from a guy who can’t even afford to pay his back child support).

I wish Andy would give us an update on all his fake charities and how many people they’ve saved.  Maybe he can preach to us from the witness box at his own fraud trial – I’m sure that will impress the judge and the jury.  Hey Andy, if you’re reading this (and I know you are) don’t forget to have your lawyer tell everybody how many lives you could save if they just ignored all the money you stole and let you go free.

Andy Esquivel’s scams never cease to amaze me.  Few things are as entertaining as debunking this scumbag’s ridiculous claims and revealing the extent of his psychosis.

The latest example is Andy’s claim that he’s sold the rights to the “Xtagged movie” to film producer Brian Doubleday (Producer of 1999 blockbuster ‘Instinct’, early 1990s hit television series ‘Venturing’, & 2008 documentary ‘Big River Blues’).  As evidence of the current production of this eminent documentary, which Andy hints will be bigger than “The Social Network” because he claims to have retained the ‘Facebook lawyers from the film’ to represent him, Andy has been broadcasting links to a 60 second video in which he tells part of his story.

It’s an impressive video…well produced, excellent photography, etc.  There’s only one problem –  anybody in the Denver area with 15 minutes to burn can buy the same video from Brian Doubleday for $99!  It’s actually a terrific deal…here is the text form Brian’s “Greenworks Video” website to illustrate:

Video Bios are rapidly taking the place of text bio on sites such as Linkedin, Facebook, and an ever increasing number of other social media sites. With a 60 second video bio, you can easily tell everyone who you are, what you’ve accomplished, and give them a real sense of your personality as well.

Here’s how it works:
Call Brian Doublday at our studio (303-728-9574) or email brian@gwvideo.com to schedule your bio shoot in our studio. Once you agree about a time to come in, he’ll talk to you about what to say, and ask you to write it out and email it to him.

We’ve reserved our studio every weekday from noon until 1PM for shooting these bios. Your script will be loaded into our teleprompter (no memorization is necessary!) you’ll come in and have 15 minutes of studio time to get it done.
When you walk out, you’ll have a professionally produced video bio, with your name and title (if you want) on the screen. What could be better (or more affordable at just $99) than that!

So if any Tom, Dick, or Harry can walk into Greenworks Video and have a 60 second bio video professionally done by producer Brian Doubleday for a hundred bucks, how does a 60 second bio video of Andy from the same company prove that a documentary covering all the details of the Xtagged scam and the convicted felon who is about to go on trial for orchestrating it prove that a full-scale documentary is being produced and has in fact already started filming or that Brian Doubleday has acquired the rights to such a video?  Better yet, what happened to the documentary Andy claimed Ron Kelsay produced last year that was supposed to premier at this year’s Sundance Film Festival but didn’t?
…and if Andy really did sell the rights to the story of this scam, wouldn’t he have enough money left over from the sale to pay for an attorney to defend him in the fraud trial that begins next month or the child support hearing he had last week?

There was little (really nothing) to report from Andy’s final pre-trial hearing on January 15th.  The hearing was short and to the point – no resolution as yet (duh, Andy can’t afford to pay the victims back as would be required by a plea agreement), so trial will proceed on February 27th as planned.  Case updates as always are available exclusively right here at Xtagged.co.  You can go to one of Andy’s stupid, ranting little blogs, but all you’re going to find there is a lot of nonsense about BYU professors, Bump and death threats against Google.  Only Xtagged.co consistently provides you accurate, up-to-date reporting on what has proven to be the most colorful and hilarious fraud case in recent memory.  From indictment to conviction, nobody covers this case like we do! 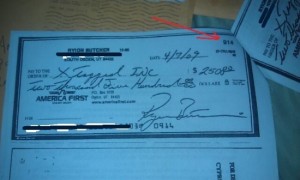 Check for $2,500 paid for 1% of “Xtagged” – part of securities fraud case against Andy Esquivel.

Andy is now posting evidence of his crimes in the hopes that this will somehow convince the world that he’s innocent.  Here’s the text of Andy’s latest post – see if you can make any sense of it:

By reading the text above you would think that the check pictured was made out to Ryion Butcher, right?  In fact close inspection reveals that the check pictured is the one Ryion Butcher wrote to Andy Esquivel in exchange for 1% of his Xtagged scam.  The text in Andy’s post has absolutely nothing to do with the check in the photo.  Note: accepting a ‘check’ in exchange for a ‘share of ownership’ in a company (real or fictitious) is BY DEFINITION a “securities transaction,” yet Andy Esquivel is going to try to make the case at trial that he never sold any securities.

In other words, here’s Andy trying to convince himself that the pictured check proves he tried to pay Ryion Butcher back, when in fact all it does is provide further evidence of the fact that Andy committed securities fraud as charged.  It’s amazing how the minds of crazy people work.  Looped logic, delusions of grandeur, fantasies of persecution – it’s no wonder poor Andy can’t get a job.

A busy week for Andy Esquivel

The first on January 11th at 9:01am with Judge Marianne Marshall Tims at the Colorado District Court room 2f relates to the fact that Andy has made no effort to repay the nearly $20,000 in back child support he owes for two of his soon to be six children (all conceived and born out of wedlock).  Andy will presumably attempt to present evidence that he once paid his ex $5,000 (which he never reported to ORS) as reason to reduce the amount he owes from $20k to the still substantial sum of $15k.  Since Andy has no means to pay either the $15k or the $20k, the question is of course moot.  He will likely be asked whether he has attempted to find work in order to meet his paternal obligations, to which he will have to respond negatively.  It is likely that the court will mandate that Andy take steps to become a contributing member of society by seeking gainful employment or face sanctions.

The second hearing on January 15th  at 8:45am in courtroom 5 with Judge David Connors will be the final pre-trial hearing for felony securities fraud case #111701135.  Unless Andy faces the music and agrees to a plea bargain in which he agrees to pay his victims back their investments with interest, this hearing will simply be a formality in which the defense and prosecution advise the court as to whom they intent to call as witnesses at the trial on February 27th.  Since Andy’s attorney has no witnesses to call, the hearing should be a short one.  Andy continues to post online that he intends to call a host of witnesses to his defense, but since Andy has an attorney now and his attorney has yet to notify anybody besides Andy that they need to prepare to testify, the odds of that are slim.

As usual, we’ll post details about both hearings as soon as the information is made available to us by the courts.

Steve Klemark is the next Steve Jobs

Here’s the latest video link from Andy Esquivel.  In this video Andy shows off a single legitimate endorsement on the fake Linked-In profile he created in Steve’s name and then brags that Steve Klemark (who probably isn’t even speaking to Andy anymore considering Andy is on trial for fraud and the Denver PD has strict rules about employees associating with criminals) is the next Steve Jobs.  Andy then claims that this blog is responsible for Steve Klemark’s wife’s attempted suicide, which is an interesting stretch, and hints at the end of his rant that case #111701135 may not even go to trial (presumably because Andy will finally plead “guilty” to all charges).  Trial is currently set for late February.

This is a quickie sent to me by my attorney Adam Platt and I thought it would be fun to share.