Yesterday the courts released the latest courtroom audio for the probation review hearings of Andy Esquivel.   To put it mildly, the court is starting to lose patience with this pathological lying sociopath.  Here’s the latest case update [PDF] and here’s the audio from the April 4th hearing [MP3]

In a nutshell, Andy hasn’t been making his payments.  He claims that he stopped making payments because he was forced to pay $1,000 per month in child support, but that’s a lie.  He was making $500/mo. child support payments, but that stopped in January. 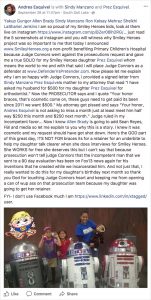 Andy’s attorney tried to plead for leniency, but that was doomed from the start because unfortunately for Andy, the prosecutor brought a screen shot of a Facebook post Andy made after the last hearing in which Judge Connors cut Andy a little slack and it was damning to say the least.

After the prosecutor read this ridiculous post, in which Andy threatens to open up a can of whup-ass on the prosecution and brags about taking the court for a ride with a made-up story about his daughter needing emergency surgery, the prosecutor asked the judge to order that Andy hand over complete financials, tax records, and a written plan as to how he intends to pay his victims back.

Andy tried to explain his way out of this hole, but it was too late.  Judge Connors had finally had enough!  The Judge ordered Andy to comply with the request of the prosecution and to do so by June 5th, 2018 or else.  At the end of the audio you can hear Andy gulp audibly as he realized his probation was about to be terminated, his plea deal invalidated, and that the full weight of his crimes will soon be on his shoulders to bare alone.

Time is up for Andy.  On June 5th, he needs to start getting serious.  The court has played games with this con-artist for seven years and they’ve finally decided not to play anymore.