To say the least, it’s been an interesting couple of weeks since Andy’s last pre-trial hearing.  We’ve got a lot to cover, but I’ll try to get through it all as quickly as I can.

First of all, a new date has been set for Andy’s securities fraud trial.  The fireworks begin on October 16th and will continue for three days.  As always you can find the latest trial updates by clicking on any case update link [PDF] you find on this website.  The trial is stilled set up as a ‘jury trial” rather than a “bench trial” because Andy isn’t smart enough to know that the only chance he has of getting this case thrown out by the judge is if he reverses the decision by his previous “super lawyer” to take the case out of a judges hands and to wait for nine jurors (who aren’t likely to fall for his crap any more than we do) to pronounce him guilty.

As reported last month on this site, Andy Esquivel recently sent out a mass email (to his supporters supposedly) in which he listed all the people he claims to want to call as witnesses at his trial.  The list was prepared in response to a court order earlier in the month in which Judge Connors demanded that Andy comply with a reciprocal discovery motion by the prosecutor [PDF]and list all the people he intended to call as witnesses.  We obtained the full list because one of the journalists who Andy insists on spamming is secretly preparing an expose on what a complete fraud Andy is and they were generous enough to share Andy’s email with us.  We correctly reported last month that (a) Andy failed to include contact information for the witnesses he claimed he was calling and (b) almost nobody on Andy’s list had even the slightest relevance to the case.

Almost as if to confirm the astute insight of this blog, Prosecutor Nathan Lyon on Thursday filed this motion [PDF] with the court asking Judge Connors to throw out Andy’s entire witness list as irrelevant to the case against him and lacking even the most basic contact information on the people listed.  The prosecutor reviews each name on the witness list (in much the same way we did on our blog post) and explains why each one is not only irrelevant to the case, but calls out the fact that Andy’s videos and links are “rambling and nonsensical.”  The only “witness” that the prosecutor approved of was Logan Laws, who is frankly on deck to testify for the prosecution so it makes little sense for Andy to call him for the defense.

In short, Andy Esquivel just got emasculated by the prosecutor and told to go home and start over from scratch…and he is still posting ridiculous videos and sending out senseless emails.  Here’s an example:

Mr Lyon I never published this witness list why did you let Plaintiff Ryion Butcher put this on his slander site:
http://xtagged.co/andy-esquivel-publishes-his-witness-list/

I have attached a copy. Allen we never published, this is why Steve Klemark’s wife tried to commit suicide all the harassment from the plaintiffs & co-conspirators trying to scare me to take plea… Lyon stated oh well when I told him of Steve’s wife last year and the attorney brotherhood that Allen and I recorded Holje say to us looks like it does exist.

Your plaintiffs say J.King from I-safe is going to testify against me remember I told King about the slander/smear campaign since 2009 we recorded it so as soon as you finally release the list that Holje nor six month Albright ever got… I will address all 4 on the list one by one I sent motion by mail we are still waiting to see who’s on list all these lies will hit a wall very soon.

Ryion Butcher stated to Xtagged witnesses which is also witness tampering, that we have reported to Mr. Lyon Davis prosecutor more than once Allen Brady went to Mr. Lyons office LAST YEAR I have web cam of Mr. Lyon and I speaking about this and Ron the documentary film maker has video from last year on Mr. Lyon and Mr. Holje call Ron 720.233.4104 Ron Kelsay! I have attached a screenshot that Ryion posted of his blog attacking my family and Ryion tells people that the prosecutor is the one telling him to attack!!! Ryion tells Xtagged owners “Just say you are a security not an owner and we can take Andy down! I am now writing a letter to the judge informing him about all the PERJURY & WITNESS TAMPERING ALLEN BRADY can verify (1.801.819.5126) the plaintiffs have committed through out this trial and are still committing with the help of Mr. Lyon says Ryion Butcher, ITS ALL LIES I have a video uploaded at karmacause proving all, Ron has video that dates earlier. My family and the media don’t believe that you guys know what plaintiffs are doing to all of us and they say court is not in order! I told Mr. Lyon about Steve Klemark’s wife and much more! Now that Mr. Lyon knows Xtagged, Inc. paperwork is 100% real not to mention all the non non-disclosures plaintiffs signed and the multiple counts of perjury that the plaintiffs have committed, the damages that www.Xtagged.co causes will be at fault of the state.

Now what exactly does the above email tell us, other than the fact that Steve Klemark’s wife tried to kill herself because she finally realized that her husband was up to his chin helping a convicted felon execute numerous scams at the potential price of his own job with the Devner PD and she couldn’t live with the idea that he might go to jail too.  Isn’t it interesting that a guy who threatened to release sex tapes of potential witnesses in his securities fraud trial to the media is accusing others of ‘witness tampering?’  Andy why is Andy so convinced that ‘his family and the media’ are on his side here?  First of all, only one reporter in the media even cares that Andy is about to go to jail and most of Andy’s family have disowned him and his convicted felon of a mother as pariahs.  Most are now reaching out to me (unsolicited) and expressing support for this website and sympathy for the victims of Andy’s criminal activity.  When is Andy going to finally realize that the only people who think he’s innocent of these crimes are drug addicts like Alan Brady and fellow criminals like Ron Kelsay and that the only person facing jail time for his crimes is himself?

The bottom line is that this trial is almost over.  With Andy Esquivel continuing to send impotent letters to the judge in this case (unaware that they’re doing absolutely no good) and being endlessly distracted by his own YouTube channel, Andy is sure to be convicted and sentenced before Christmas.  The only question is how many years in prison is Andy going to get.  I for one say the longer the better! 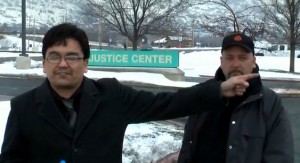