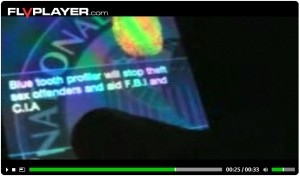 This Andy’s Thumb Scan video.  In this ridiculous display of Andy’s delusional mental state, he pretends to have invented an app called “Bluetooth-Profiler” that scans your fingerprint, and can start your car after verifying your identity.  The app even claims (look closely at the text on the phone) to “stop theft, sex offenders, and aid the FBI and CIA” at doing what it is they do.

This video is ridiculous for several reasons:

First of all, Andy is using an app that already exists called the ‘CSI App’ that doesn’t ACTUALLY read your fingerprint, but can be downloaded form the Apple App Store for a few bucks.  Ryion downloaded his own copy and laughed his butt off.

Second, Andy is clearly using a remote starter hidden in his pocket (or being used by a friend standing nearby) to start the car.  This is an obvious trick, especially to someone who has a remote starter…like me.  We actually have images of the remote starter Andy used.  My attorney downloaded it from Andy’s Xtagged website.

Finally, even if this app were for real, it wouldn’t make any sense!  A remote starter app that reads your fingerprints (this generation iPhone isn’t sensitive enough to read a fingerprint) is one thing, but how exactly does a remote starter stop sex offenders?  How would a remote starter, even one with fingerprint identification, aid the CIA?  To suggest the FBI is already a stretch, but to say the CIA means that Andy has completely lost his marbles!

…and what does all this have to do with blue-tooth?

You can watch Andy try this trick again in the daylight in this video.