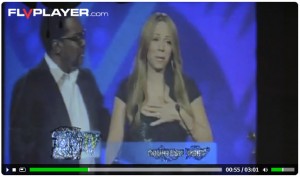 This is Andy Esquivel’s famous Mariah Carey video.  In this video Andy is drunk and jumping around his mother’s living room pretending to wave a can of the new energy drink in his hands.  He’s standing in front of the projected image of a Youtube video of Mariah Carey speaking at an awards show in Palm Springs.  The video has credits on it identifying it’s source and Andy has taken aluminum foil to the wall where the images is projected to obscure those credits.

In the video, Andy claims that he’s in the home of one of his rich and “spoiled” investors watching this video on a “really big screen.”  Of course this is one of Andy’s many fantasies.  You can see the shadow of his mother’s ceiling fan on the image projected on the wall and it’s obvious he’s using a laptop projector.  We also know this is his mother’s house because he walks you through it in this video which gives a clearer image of the living room and the projector used.  A video walk-through of the upstairs can be found here.  In the walk-through videos, Andy’s daughter’s toy car can clearly be seen in a corner, Andy’s car is in the parking lot, you get a view of the room where the towing video was shot so once again it’s clear this place is not owned by a rich investor.

When Andy first sent me this ridiculous video, I was so upset that I told him never to send garbage like this again:

Dude, that’s the stupidest thing I’ve ever seen in my life! Please don’t waste my time with crap like that anymore. I’m very busy these days.

You Have Been removed from Xtagged mail list! Dude my name is Steve as it read at the bottom of your email. And know that i see your from UTAH, I need to no longer wounder why Andy left There! But i will wounder why. Andy wants to buy party Utah, now That i Know who you are, and will see about that, I can  build him same site For pennies on the dollar or get one of the many temples out there. and name it Utahwhatever, See its not nice to be a You, Dude This is for charity, you know the thing that partyutah.com could have built from being that all your sites about is bars clubs you know Napkin nights sort of thing. you could have applied free taxi service to your site, where people could have logged on to your site to get free taxi service! OK Now i just figured out why Andy wanted your site. And proper men do not sent emails with swear words, we are a family based company because of the safety aspect   of site And Buzz/wiser the commercial that would have aired on your site teaches kids responsibility unlike 1995 Budweiser’s that taught kids to remember Budweiser when they turn 21. so just so you know we have been getting positive feedback from this, you are the only negative feedback THX.

P.S ASS-WISER Will be available soon near YOU! Its guaranteed to make you think of other people than yourself!
Good Day Sir Ass-A-Lot!
Steve K co-owner of Xtagged and hopefully soon Buzz/Wiser!
No need to email me back until you have taken your dose of ASS-WISER, Wow i am still in shock of who you are and that this is forrrrr! charity period. God Bless

After I received this ranting, crazy email from Andy pretending to be Steve Klemark, I knew I was dealing with a nut!  It was at this time that I began researching Andy to see if he was for real and found Ryion Butcher’s blog.  A full breakdown of this email exchange can be found in this document compiled by my mother, who was pretending to be the Xtagged CEO at the time.