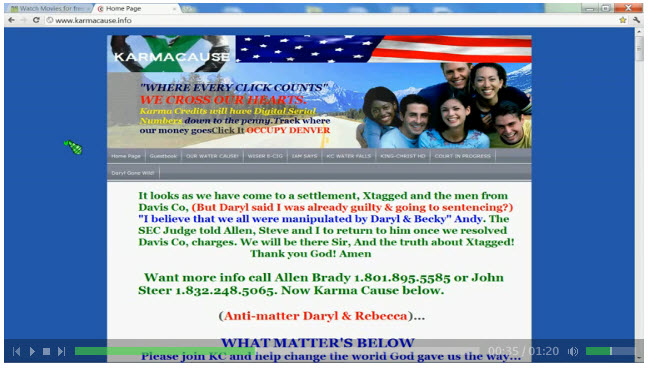 In this video, Andy Esquivel has Ron Kelsay on the phone and they’re bragging that Ron and Ryion have come to a settlement in the case against Andy.  They claim that Ron has negotiated the repayment of the roughly $20,000 that Andy stole from Ryion, Kyle and Chris in exchange for something, but not sure what.

In the video Andy griped that I’m trying to manipulate the settlement when I correctly pointed out online that Andy paying the Utah victims back would not stop the criminal charges pending against him from moving forward and would have little impact on the felony case against him.  In spite of my malicious blogging however, Andy claims that his real enemy is me (Daryl) and that Ryion and the reast were really cool guys.

Here’s the rub: Andy didn’t have the money to pay Ryion, Kyle or Chris back and frankly this was all just an elaborate show to convince Ron Kelsay (a gullible convicted felon Andy picked up in Denver) that he was legitimate.  Ryion never expected to get paid back and neither did the other Utah victims, but they went along with the charade in case Andy was desperate enough to prove himself not to be a fraud that he actually found the money somewhere and gave it back to them.

In the end (of course) there was no money.  Andy found some excuse to push back the payment deadline and then to claim that the deal was off.  All this was really immaterial, but it’s an amusing example of Andy trying to prove himself to someone who hasn’t yet figured out he’s a scam and going to the extreme length of saying that someone he’s been lambasting for three years is “really a cool guy,” only to change his mind when the ‘cool guy’ proves once again that Andy is a fraud.

One thought on “Ron Kelsay Negotiates a Settlement?”