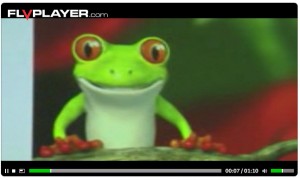 Here’s another stupid Andy video.  Here Andy once again claims to have sold Xtagged, the fake company he used to scan several Utah investors out of tens of thousands of dollars, but he does so in the shape of a frog while announcing the launch of a fake energy drink.  This is Andy’s second most hilarious video ever (the Mariah Carey video takes the award there) but it’s one of our lost favorites.

Enjoy this gem while we prepare other classics for upload!