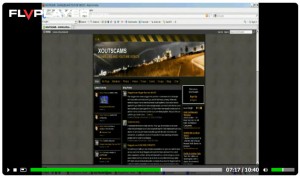 Well, we’ve finally located Andy’s dumbest and most revealign video.  I call this the “Healthcare Video” because about 5 minutes into it, Andy claims that he’s using 51% of the profits from the scam to fix healthcare.  This is about the time when Congress was debating Obama’s healthcare reform bill, so it goes to show Andy’s lack of creativity.

This video is the most telling of all Andy recordings because it was made before he realized he’d be open to the intense scrutiny of this blog or it’s predecessor massage board thread.  In it he shows off his full lunatic glory by bragging with wild abandon about the millions of dollars he could be making without any regard for physical reality.  Over time Andy’s videos became slightly (but not much) more restrained  and he took a little (but not much) more care to make claims that weren’t as easy to invalidate.

To add to the fun of this video, I’ve decided to break the lies down by video timestamp.  This will allow the viewer to jump to the funniest parts of the production without having to wait through other less interesting claims along the way.

Since he’s facing three felony counts of securities fraud, I think the answer is clear…”You are, Andy!”