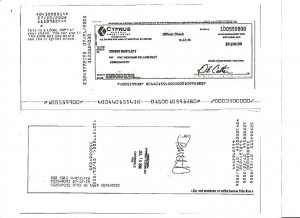 Here’s an interesting footnote to the whole Xtagged scam story: Andy is now bragging about embezzling funds from his own fake company!

Recently Andy Esquivel has taken to threatening his ex girlfriend (mother of two of his five kids – Andy is apparently not big on marriage) with fraud charges for, as he describes it, not reporting a $5,000 payment he made to her for ‘child support.’  Andy is using this distracting argument to deflect attention away form the fact that he currently owes nearly $20,000 in back child support to ORS and has no means to pay it.

The truth is very interesting.  As it turns out, Andy is talking about money he received from Ryion Butcher to purchase 1% of a fake company called “Xtagged.”  Ryion gave Andy the $5,000 check for his fictional 1% after signing a fraudulent contract given to him by Andy  (this, by the way, is the dictionary definition of a “securities” transaction).  Andy took the cashiers check and attempted to sign it over to his ex girlfriend, but she smelled fraud someplace in the mix and declined to accept the third party check from Ryion.  Andy then asked his ex to meet him at a Cypress Credit Union in West Jordan where he cashed Ryion’s check and exchanged it for another cashiers check made out in her name.  Andy now claims that this $5,000 check should have been reported to ORS as ‘child support’ and the fact that it wasn’t reflects some sort of deception on his ex-girlfriend’s part.

Unfortunately for Andy, the laws surrounding this series of transactions are very clear.  First of all, it is Andy’s responsibility to communicate with ORS and to notify them of any child support payments he made to his ex.  Without such paternal reporting, any monies paid to Andy’s ex are considered “gifts.”  The fact that Andy has been hiding from ORS for years means that he gave up the ability to self report payments while he was out of contact.  The only reason ORS ever even found Andy was because the administrators of this website provided them with his address, phone number, and a photo for spot identification.  It doesn’t pay to run from your parental responsibilities – especially if you’re going to be loud about it.

Secondly, the fact that Andy diverted funds specifically entrusted to him by an ‘investor’ in a company (albeit a fake company) he claimed to be principle of  is legally considered embezzlement and is further evidence of fraud!  I wouldn’t be surprised if the prosecution calls Andy’s ex to testify in February for the purpose of describing the depths of Andy’s criminal activity in this case.  In the legitimate business world, the idea of taking money from investors and giving it to your ex-girlfriend is unthinkable!  Fortunately for Andy, he’s already on trial for felony securities fraud so the revelation can’t really make things much worse than they already are.

Finally, even if the judge in Andy’s January child support hearing decides to give him credit for the $5,000 he stole from Ryion Butcher to give to his ex-girlfriend against his existing liabilities, he still owes over $15,000 in back child support.  Since Andy doesn’t have a job, is completely broke, and is on trial for a felony that will make it difficult for him to find legitimate employment in the future even if he manages to stay out of jail, the odds of him being able to satisfy this obligation are remote.  It must suck to be a destitute con artist with no means to support your numerous, illegitimate children.

Maybe Andy will come to his senses soon, cop a plea to stay out of prison, and will find legitimate work somewhere.  I know Walmart is hiring seasonal warehouse help this time of year.  With a little luck, they’ll overlook Andy’s criminal past and give him a second chance at life.