Pathological lying sociopath and convicted felon Andy Esquivel, who is representing himself in his own securities fraud trial, has published his witness list for trial.  We’re sharing it here to help others understand how crazy Andy really is and to display the full extent of Andy’s criminal activity.  The words below are Andy’s with the truth in brackets.

Daryl Acumen: he recommended law firm look at the seven email video  Allen fired Daryl from Xtag in 07 to hire his mother Rebecaa Dunn as Xtagged CEO, Daryl then started this conspiracy with Ryion etc. #0069 [The fact is I never worked for Xtagged, so I could never have been fired.  That said, I can’t wait to testify against this lunatic and to explain to a jury how crazy he really is…if he’s dumb enough to put me on the stand.]

Jason Webb: Xtag patent/corps attorney he told all Xtagged owners he could only sell securities #0070 [Jason was found to have acted improperly by convincing certain fraud victims that Xtagged was a solid investment.  His law firm faced disciplinary action by the Utah Department of Securities for the actions of Webb, which violated securities law.]

Logan Laws: Logan & Ryion teamed up for $5,000 & after Logan begged Andy to separate them due to Ryion Butcher being a A—hole these are Logan’s words about Ryion to Shar Jenkins & texts #0073 [One of Andy’s fraud victims, eager to testify against Andy]

Steve Klemark: Wisertechnology.com CIO I have attached his Denver Halo P.D ID Steve Bought Xtagged in 2009 & he made Ryion B. $5,000 money order… Steve stop going with Andy to court in Utah because Steve said prosecutor J.C.Y. & Mr. Holje was conspiring. Steve made two videos… #0074 [Low-level IT guy at the Denver PD who supposedly purchased Xtagged for $24 Million dollars.]

Shar Jenkins: not only paid Logan Laws $2,500 money order he offered everybody buy-outs just as Steve K. did and Allen Brady and many more… #0075 [One of Andy’s brainless minions who pretends to be some sort of marketing guru.]

Sindy Manzano: worked for Xtagged 06 to present in 05 the Deseret News did story on Sindy Manzano D.I.D file #0077 [Andy’s live-in girlfriend and mother of three of Andy’s six illegitimate children.  She lives on welfare because she claims she can’t work due to this blog.]

Trevor Riley: Xtagged Inc Bank manager and helper his email FB attachments are to his attorney #0078 [A random bank clerk who Andy pretends has something to do with this case.]

Allen Brady: Wisertechnology.com CEO I think Allen has told you plenty and gave you his paper work Allen and his family attempted many time to buy-out the plaintiffs they just attacked Allen and his mother… #0079 [Andy’s mindless puppet who is illiterate and an admitted drug addict.]

John Steer: He was second victim at hero’s computers 09 in Bountiful, John can verify conspiracy John also made up paperwork for Ryion Butcher & Taylor he was second in command at Xtagged #0080 [Andy’s cousin and accomplice in most of Andy’s fraudulent schemes.]

Jake House: ran our Bountiful Sushi shop with John Steer Jake is co-owner of Xtag & has exact paperwork as Ryion Butcher and Jake has made video testimony online against Ut plaintiffs #0081 [Another random co-conspirator of Andy’s.]

Jeff Parker: My first partner we bought first system stickers together Jeff has exact paper as Ryion and was at trial Feb, 26, 2013 #0082 [A random guy Andy found to support him at court because everybody else had finally figured out Andy was a fraud.]

Daris Garner: My third partner 06 after Jeff Parker we all worked for Saeed K. at Comcast, Daris has the same paperwork as Ryion B. and was at pretrial Holje would not speak to Daris nor Albright… #0083 [Another Xtagged fraud victim.]

Andre Rawka: John Steer gave Andre 1% ownership free for all the media Dre brought to Xtagged and yes it was the same paperwork as Ryion’s. Dre is now a climbing star in Utah #0084 [Some local rapper who Andy convinced to endorse his various scams for a price.]

Jason Cowdin: Taylor Jones got ownership for Jason C. from John Steer & I yep John gave Jason same paperwork as plaintiffs. Jason C. was responsible for big VC meeting one with his mentor that stated “Andy is not about money” then second meeting with Social Sam people. #0087 [Another Xtagged scam victim.]

Brain Davis: Mel & Brian 3% ownership of Xtagged Brian’s with Bountiful Brian Davis paperwork. #0088 [A real-estate investor from Ogden who refused to deal with Andy because Andy was never able to provide evidence that he was a legitimate.]

Chue Berriel: of CEA Property’s Investments llc co-OWNER of Xtagged since 2008 Daryl & Ryion tried to manipulate Chue by contacting her son Edward Gonzales as court has been in progress look at Chue’s statement on LinkedIn #0089 [Andy’s aunt who was scammed out of tens of thousands of dollars.  Andy spoofed her identity on LinkedIn to pretend that she wasn’t on the verge of turning him into the police.]

Ladd Quayle: plaintiff Kyle Cluff gave ownership to Ladd Q. you have copy of Kyle’s email to Andy telling Andy to give Ladd ownership of Xtagged here’s Ladd’s latest email April 8 2013 below #0090 [One of Andy’s victims who is eager to testify against him at trial.]

Professor John Richards of B.Y.U: he would not meet until our paperwork & no scam was confirmed Ladd has all emails from Steve klemark because Steve Bought Xtagged Dec of 2009… #0091 [Met with Andy once and saw through his garbage within minutes and refused to meet with him ever again.]

Rebecca Dunn:  Xtagged.com C.E.O 2008-2011 I have provided seven emails dating 01-25-08 to 03-02-08 that proves all you have copies of our Xtagged CEO Final warning letter. #0092 [Andy conned Rebecca into thinking she was CEO of his various scams.  She eventually realized that Andy was a fraud and turned over piles of evidence against Andy to the courts.  She will not be at trial.]

Andrew Couch of Bump.com: #0093 Andrew told all Xtagged workers “We are going to put Andy in prison no matter what” Andrew conspired with Daryl A. & Ryion B. to smear/slander Xtagged and then re-filed patent in May of 2010, Andrew’s & Andy’s 2007 [Principal at Bump.com who has been harassed by Andy for years.  Has no interest in Andy or this case.]

Jonathan King: ex-FBI agent I meet with in 2009 plaintiff Kyle Cuff arrange meeting I told him about The smear/slander conspiracy back in 2009 and I gave him 40% ownership of Xtagged… #0094 [iSafe executive who knows better than most how much of a fraud Andy is.  The company came very close to suing Andy Esquivel for compromising their name by claiming that his scam was endorsed by them.

Final witness Leonard Martinez & his assistant: Allen Brady and I gave them $2,575.00 in 2010 to pay Plaintiff Chris E… Leonard can also confirm smear/slander conspiracy 2010 through 2013 #0095 [Leonard Martinez dumped Andy Esquivel as a client years ago because he realized that Andy was not only a fraud, but also crazy.  Leonard was the first of Andy’s string of lawyers to abandon Andy as a client in disgust.]

Just in case there was any doubt left in the world that pathological lying sociopath and convicted felon Andy Esquivel is completely insane, here’s a post from one of Andy’s blogs to dispel all doubt.

Andy pitched how important a car plates network was for future “Driverless Cars” at CES show 2007. Allen Brady “How would you call a Driverless Taxi, on your smartphone “Just take a pic of the Taxi’s plate number & it will meet you at a safe pick-up area like The Long Rangers Horse” Xtagged system is worth Billions…

Now there are several obvious problems with Andy’s delusion.  First of all, Andy never spoke at CES in 2007.  In fact, I doubt he could even afford to go.  If he did manage to scrape up enough money to go to Vegas that year and tried to talk to someone about “driverless cars”, he’d have been laughed out of the building.  Second, there is no “Xtagged system”.  Third, the idea of hailing a taxi by scanning it’s license plate before it arrives is ludicrous and not very well conceived.  It’s the kind of thing only a drug addict like Andy Esquivel could dream up.  Finally, “Lone Ranger” is spelled with an “E” not a “G” as in Andy’s post.  The ranger was alone, not long like a pipe.

Andy is still clinging to the delusion that his imaginary company is somehow worth “Billions”, which is a fantasy he will likely still be clinging to when he’s shipped off to prison for securities fraud later this summer.  The only question is whether Andy will try to impress the jury with his long list of imaginary inventions or whether he’ll go to jail quietly without so much as a whimper. 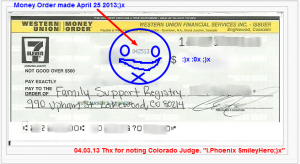