Posted on February 25, 2013 in Uncategorized 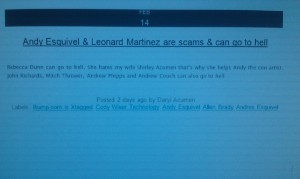 Andy Esquivel is getting really desperate ahead of his pre-trial hearing on Tuesday.  He showed off his desperation over the weekend when he posted ‘smart-phone’ photos of a screen shot of what he supposes to be a post from me in which I allegedly tell him, Leonard Martinez and my mother to “go to hell”.  The image is obviously fake and I had a lot of fun picking the image apart this morning before work.  Here are some things to notice which prove the image was concocted by Andy, not a legitimate post by yours truly:

It’s interesting that Andy has become so desperate only days before his pre-trial hearing on the 26th.  I’m kind-of curious what’s causing him to panic so.  Trial won’t be for at least another month, so he’s got plenty of time to pack before prison.  What is he so riled up about?