The trouble with pathological liars is that they can never keep their lies straight.  Case -in-point is Andy Esquivel’s ridiculous claim that I once worked for him at Xtagged.  Andy has repeated this story over and over again ad-nauseam and I’ve repeatedly refuted the story by pointing out that I was working for Omniture at the time and the chances of me leaving a lucrative career at a company on the verge of a successful IPO to join a con-artist at a fictitious company that owned a website that generated only a tiny fraction of the traffic I was driving on my own entertainment website were exactly zero!  Andy claims that my supposedly being fired from his scam explains why I’m so determined to see him brought to justice for his crimes.

The latest installment in this gag is the following post on Andy’s Diigo blog.  I’ve atatched a screen capture to this blog because I’m sure Andy will delete the post once he realizes how stupid it sounds.

Daryl Acumen was fired from Xtagged 2006 and tried to come back but Allen Brady told him NO in 2007 at Xtagged club PlayGround. Daryl then started Xtagged smear/slander campaign which excelled big time in 2009 because of Bump.

Andrew Phipps filed patent May of 2010 after he was convinced Xtagged conspiracy was sending Andy to prison falsely! Andy has phone call recorded with Andrew Couch 2008-2009 Andrew says “Andy if you are not going to join with us give me your address so I can send you cease & desist order because we already filed patent before you” Liar Liar Liar… 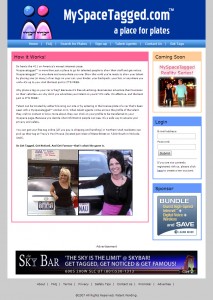 The MySpaceTagged website as it looked in late 2007 when I first met Andy Esquivel. Notice the Skybar banner copied from PartyUtah.com and the advertisement for a fake reality TV show in the upper right-hand corner.

Even though every word of this post by Andy is a lie, my favorite part is the first sentence: “Daryl Acumen was fired from Xtagged 2006 and tried to come back but Allen Brady told him NO in 2007…”  Now, never-mind the fact that “Xtagged.com” wasn’t even registered as a domain name until October 26th of 2007, the fact is even if I was dumb enough to accept a ‘job’ from a convicted felon like Andy Esquivel in 2006 it would have been impossible because I didn’t even MEET Andy Esquivel until the Winter of 2007!

In mid 2007 Andy Esquivel stole a banner from my website to promote a nightclub in an effort to get free drinks from the owner.  The owner asked me to talk to Andy to find out if he was legitimate later that year.  I finally met Andy in November 2007 and by late January 2008 I was beginning to realize he was actually a scam.  I have photographic proof to substantiate my timelines, including a photo of my license plate taken January 27th, 2008 at Andy’s request, but I’ll save them to embarrass Andy with in the event I’m called to testify at his fraud trial in June.  The entire scope of my interactions with Andy Esquivel and his Xtagged Scam, prior to his offer to buy PartyUtah.com from me for $150,000 in 2009, was the three months from late November 2007 until February 2008.  It took me a little over two months to figure out that Andy Esquivel was a con-artist and his Xtagged website was a scam, but it wasn’t until 2010 that I would learn the full extent of his criminal activity and be inspired to help bring him to justice.  It’s a shame the real owners of the now defunct “Club Playground” aren’t around to testify to Andy’s attempts to defraud them, but I suppose three felony counts of securities fraud will have to suffice for now.