Andy Esquivel says Xtagged wasn’t a scam after all

I know this will come as a SHOCK to some of you reading this blog, but Andy Esquivel recently posted a new YouTube video in which he claims that (get this) Xtagged wasn’t a scam after all! 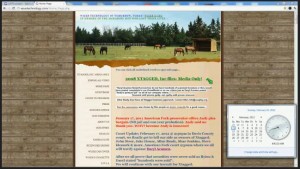 Wow, what a relief!  I had no idea.  Damn, well I guess Andy can fire Michael Holje now and we can all go home…NOT!!!

As ‘proof’ for his assertion that Xtagged wasn’t a scam, Andy points to a password protected  link on his Wiser Technology tombstone website which he says contains documents which PROVE that even though Xtagged never legally existed, it somehow legally existed – did you follow that?  No?  Ok, let’s try again…

In order for a company to legally exist, it must be registered with the Secretary of State of the state in which is chooses to do business.  Oh, and it should probably have a business license to go with that registration.  Xtagged, Inc. never had a business license, and was never registered in either Colorado or Utah.  That means Xtagged Inc. never existed except in the imagination of Andy Esquivel.

Just to be clear for those of you who are still confused: just because Andy Esquivel pretends that a company exists, that doesn’t make it so.  😉

So, Andy has these fraudulent documents which he claims prove the impossible, but they’re hidden behind a password protected link that he’s only given to the multitudes of journalists, who couldn’t care less about him because none of them ever show up to any of his court hearings, and he expects those of us who aren’t out of our minds to believe him?  …uh-huh, that’s what I said.

Anyway, in Andy’s video, he goes on and on about how he warned everybody that Xtagged wasn’t fake (as if that somehow makes the company real) and points to an email he sent in which he tells everybody this months ago.  He even claims to have told the SEC (by which he means the Utah department of Securities).  Gee, I wonder why the Davis County Prosecutor decided to go ahead with the case when Andy had sent out this email saying he wasn’t a scam after all?  The Utah Department of Securities investigator must feel like a fool for missing Andy’s email telling him that the whole investigation was a waste of time.  All Andy has to do is show that warning email to the Judge on the 21st and I’m sure it’ll all be over.  Good luck with that Andy!

Esquivel even digs out an old email my mother wrote when she was still completely delusional and hanging on Andy’s every word.  My mother later apologized for the email and admitted that everything in it was a lie, but that doesn’t deter Andy.  Beckie even tried to make up for her part in Andy’s various scams by sending hundreds of pages of incriminating documents to be used against Andy in his pending fraud case (see Beckie Speaks for a sample), but again Andy is undeterred.

All-in-all it’s a pretty sad video.  Andy is obviously out of steam and grabbing at straws to try to save his pride.  I guess facing felony fraud charges and an eminent indictment can really weigh on a guys psyche.  No matter, it’ll all be over soon.  All Andy has to do is plead ‘guilty’ and he might be able to avoid spending the next several years in a Utah state prison.

…or he can just go into hiding for ten years like he did when he was charged with 2nd degree felony burglary of a dwelling in Weber county back in 1988 and just hope the whole thing blows over before he’s 50.